Water Energy LLP was organized in 2017 and carries out commercialization of the results of scientific or scientific and technical activity on approved Subproject "Manufacturing of pilot-industrial samples of disk hydroturbines and components for micro HPPs of different capacities and organization of their industrial production" (Grant No. SSG-17 / 0028F, GPS, SC MES RK project "Stimulation of productive innovations for 2018-2020 years).

New technology for hydropower is based on integrated use of new methods to reduce losses in pressure line and in transmission mechanism for production of electricity and / or heat, as well as modernization at the level of inventions of disk hydroturbine structures, inertial transmission mechanism and rotor-disk heat generator for direct conversion of mechanical energy of hydro turbines directly into heat. 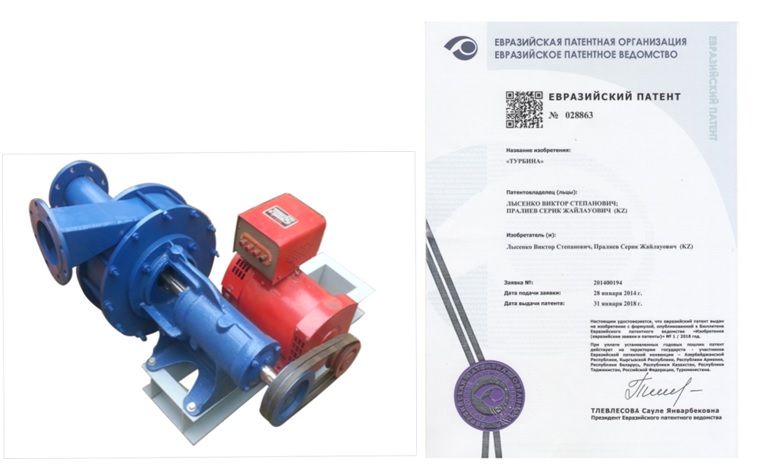 Photo of micro HPPs with a power of up to 10 kW with a new disk hydro turbine. Eurasian patent for a turbine

Proposed new disk turbines can also be used in the form of steam and gas turbines.

New technology for heat supply is based on integrated use of vortex, centrifugal and cavitation effects, as well as electromagnetic drive. Vortex effect is created due to rotating electromagnetic field in the gaps between discs, which are heated by means of electromagnetic induction effect. This allows you to compensate for energy consumption of the rotary drive of electric motor. At the same time, due to centrifugal forces and geometric shape of housing outlet channel, liquid flow is formed as a tornado, which leads to more than tenfold increase in rotational speed of water flow. Water thus heats up with a sharp braking at the exit from vortex zone. Also, due to centrifugal forces, a vacuum is created in the gap between the rotor with system of holes and the housing, which leads to intense cavitation and, accordingly, additional heating of liquid. This creates an overpressure in the heating system, which ensures circulation of working fluid. That is, there is no need for a circulation pump. Electromagnetic drive eliminates seals, which have a low lifetime and require constant operating costs.

Design of proposed heat generators has an industrial novelty.

Competitive advantages of proposed disk hydro turbines for micro HPPs and heat generators over foreign traditional counterparts are as follows:

• high energy conversion efficiency (80-85% for hydro turbines, 96-98% for heat generators);
• low production cost (due to the use of cheap materials and producibility of manufacturing of working bodies of turbines and heat generators);
• environmental safety (minimum impact on water structure by hydraulic turbines, absence of harmful emissions of heat generators);
• bearings are outside turbine housing, as a result, the water cannot be contaminated with lubricants;
• a wide range of practical applications of new technology.

You can get to know the representatives and products "Water Energy LLP" from September 4 to 6 at Aquatherm Almaty 2018, “Atakent” KBCC, Pavilion 11